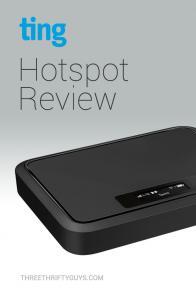 Have you ever watched the World’s Strongest Man competitions? You know, during those times when you’re deathly ill with the flu and can’t sleep so you set up shop on the couch for 48+ hours next to a bucket and 2-liter bottle of 7-Up? Maybe I’m the only one.

Anyways, I love some good, old-fashioned, tests of strength and I thought I’d put a new internet option through a gauntlet of tests as well. Ting mobile, where I have service for all of my cellular devices (can’t say enough good things about our experience there), is offering a mobile hotspot for $25 per month, capped at 30 GB of data. I was game to try it out as a possibility for a home WiFi connection, mostly because I hate my internet service provider with the same passion that I hate stepping on Legos in the middle of the night.

After I received the device in the mail, set-up was straight-forward. I slid a Sim card into the device, plugged it into the wall, and activated it through ting.com. The device is really small and sleek so I preferred it to a bulky router and modem. But now it was time for the tests. I gained some inspiration from watching those behemoth individuals on tv and set up four tests for the hotspot.

You never really know how strong a man is until he has to lift a 17 billion pound rock sphere off the ground. And you never really know how strong a connection is until you FaceTime with Grandma. The initial call went well, but moving around the house put some stress on the connection. My wife reminded me that our current internet set-up has similar issues, so the hotspot wasn’t written off just yet.

I love seeing those dudes pull a bus. But they can only go so far. How far could my hotspot go? I live in a ranch home with 4 bedrooms, so I went to each bedroom, the basement, the deck, the garage, and bathrooms (crucial if you know what I mean) to test the signal strength. The hotspot was stronger than I thought, but probably not what we were used to, and that is a pretty low standard. Because the device is so small, I was able to easily try out a lot of places for placing it.

Test #3: The One Where They Tip Over Those Big Finger Things

How many weird-shaped objects can one man pick up and push over? Better question: how many devices can this hotspot handle? I put both phones and a laptop on it, and it seemed to be ok. My current internet doesn’t handle much more than that, so I wasn’t going to stretch my hotspot past that either.

The Pillars of Hercules

I kind of get a kick out watching a man’s veins pop out of his skull while he stretches his arms out to hold up two enormous pillars. How long can he make it? The true test of endurance. I was curious to see how much data I would use over a 24 hour period and project that over a month’s time. There is a hard cap at 30 GB, and I don’t want to cut back on my Blacklist binge-watching every 27th of the month. Ting.com does a really good job of tracking minutes, messages, and data usage, so it was easy to see if my internet use would wear out the hotspot. My family used right around 1 GB of data for the day (don’t judge), so that made me a little uneasy on the monthly total.

I like Ting and I hate my internet provider as much as I hate sour milk, so I was really hoping this would work out. Unfortunately, the strength wasn’t quite there to provide reliable internet for the distance and amount required. Because the price is so low, I’d definitely recommend a Ting hotspot as a primary source of economical WiFi in a small living area. Because the installation is so easy, I’d recommend the Ting hotspot for a person who is on the move and wants a reliable, but limited, WiFi capability.

What about you? Do you have any WiFi alternatives that would make it in my world’s strongest competitions? 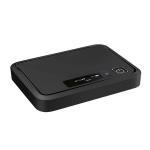