I bought my very first laptop during the summer of 2000. There are cell phones today that have better specs than that laptop, but back then, it was a top-of-the-line machine. Another way to say this: I paid way more than anyone should ever pay for a laptop with a 20GB hard drive. It was priced at about $1,500.

But then came the upsell.

An “upsell” is when a salesman tries to convince a customer to buy something more expensive than what he or she intended to buy, or purchase accessories for the product as well. In this particular case, I did both. By the time I walked out of there, I had spent over $2,000.

Unfortunately, that’s not the last time I’ve succumbed to an upsell. Even worse: sometimes, the upsell comes from me — a voice in my head convincing me that the better version is only $10 more, or a well-rehearsed sales pitch I recite to my wife as I lead her toward the bigger TVs at Best Buy.

Eventually, I’ve come to accept that the upsell only seems like a great deal. In fact, sometimes buying more can end up being more hassle than it’s worth or simply money down the drain. Here are three examples where settling for less is not only financially savvy but practical, too. 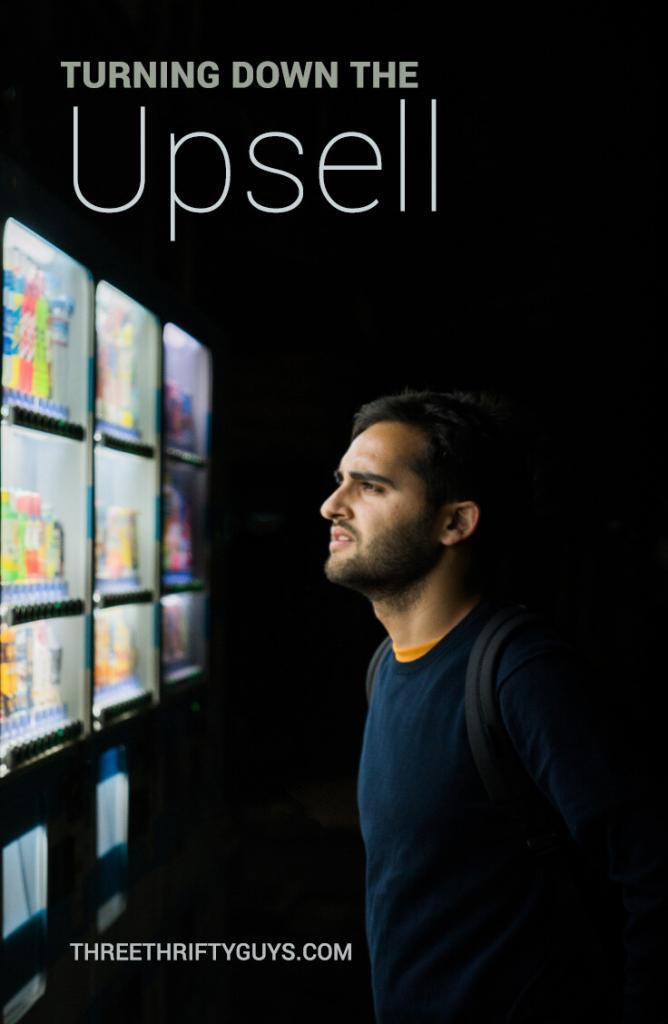 Technology today is powerful, fast, and cheap. That $2,000 laptop I bought 13 years ago is easily outclassed by current laptops selling for a quarter of that price. If your computer usage is limited to surfing the web, streaming audio and video, checking your email, and doing work in Microsoft Office, just about any of those inexpensive laptops or desktops will do. You can certainly improve your computer experience with a more powerful processor and a solid state hard drive, but you really don’t need either of those to do work in Word or watch cat videos on YouTube.

If you have a hobby (like gaming or video editing), or are in school or a line of work that require specific programs, you may need a higher-end computer. Otherwise, a laptop with an mega quad core processor and a massive hard drive is probably overdoing it; you may never utilize all that extra power and space you pay for.

My wife and I love the Harry Potter films, but we don’t own any of them. Years ago, we decided not to buy them individually and instead waited for the complete special collector’s edition blu-ray set that was inevitably coming. The set was released it last year…for $500. It probably would have been an almost complete waste of money had we bought it; I doubt we would have watched even half of the bonus footage and special features.

Is the extra money for a special edition really worth a second blooper reel, or the making of the behind the scenes documentary? If you honestly can’t see yourself spending the time to watch all these things, sticking with the regular edition DVD should suffice.

If you have a blu-ray player, don’t forget that it plays regular DVDs, too. I appreciate the high quality picture of blu-rays, but not every movie or TV show needs to be seen in 1080 HD. Buying a visual spectacle, full of special effects like The Avengers on blu-ray makes sense, but I probably don’t need to pay extra to own the latest season of The Big Bang Theory in full HD.

A large HD TV might seem like a great buy, but consider the logistics of finding a place for one in your home. If it’s too big for your room, it can cramp your space and create poor viewing angles. It can also seem like you’re always sitting too close to the screen.

In addition to larger sizes, salesmen will often try to convince you to buy a TV with a lot of fancy features. But as with special edition DVDs, ask yourself: are all those extra features worth the additional cost? Remember: buying a 3D TV means buying 3D accessories, a blu-ray player if you don’t already have one, and the more expensive 3D version of movies.

If you have a Netflix or Hulu account, a TV with internet capabilities may make sense. However, it would likely be cheaper to get a Roku or similar HD streaming device instead. Also, most HD TVs have an input for computers, so you can stream movies from your laptop or desktop and use your TV as a monitor.

Admittedly, I sometimes have trouble remembering all this while hearing a sales pitch in a showroom. But while a part of me will always want the faster computer and the bigger TV, I know that I’m so blessed that even when I settle for less, I usually still end up with way more than I need.

Have you ever been upsold anything? How do you convince yourself to settle for less?