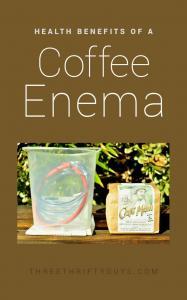 When my wife first suggested it – I was a little shocked.

Oh, the adventures of married life!

Ever since my wife began her journey to better health (she deals with chronic pain), she’s seen a bit of improvement. And, she’s always on the look out for different ways to improve her condition.

I don’t blame her. Having to deal with pain, all – if not most of the time in some fashion – would be difficult.

I admire her for never settling for the traditional “take this pill” advice and has researched a lot of different alternative therapies that have helped her more than many of the western medicine treatments offered to her.

That said, the coffee enema treatment threw me for a loop.

She had me at “parasites”

“Everyone has some form of parasites inside them.”

Apparently the research and different natural treatment testimonies she was reading verified this claim. And after I thought about it a little bit, given all of the different foods we eat and things we touch – places we’ve been – I guess it wouldn’t surprise me if I had a fella or two hanging around.

The enema was supposed to clean house (so to speak).

A little background about Gerson Therapy

I should say right now that we are not doctors and the results that we saw (I should say, I saw) are not necessarily what you may see if you do a similar cleanse. We’re just sharing our experiences with this cleanse and how it went. Please do consult with a doctor if you have pre-existing health conditions or other issues that may cause your body to go into a tizzy if you were to try this cleanse. There are many advocates for this treatment as well as naysayers.

My wife would make a great librarian if she ever wanted to do that. She researches the heck out of everything and loves to learn new things. So, I knew this new “treatment” had been vetted.

Awhile back she had told me about the Gerson Institute which was started by Charlotte Gerson, the daughter of controversial doctor, Max Gerson, who developed a therapy which he said could help treat degenerative diseases and cancer. This therapy – called Gerson Therapy – has some mixed reviews and is actually banned in the U.S. Because of this, patients who wish to try this treatment have had to travel to Mexico and Hungary to receive it from the Institute. In addition to hourly glasses of organic juice and various dietary supplements, patients also receive enemas of coffee (sometimes up to 5-6 times a day).

An Australian health blogger named Jessica Ainscough (The Wellness Warrior) tried the therapy for a couple years after the epithelioid sarcoma cancer of her left arm resurfaced. The treatment was amputation – but she refused to do so and opted for alternative treatments, including Gerson Therapy. Even though her diagnosis was terminal, Ainscough lived for several years after.

One could say her living with cancer for this long after given a terminal diagnosis was a success – but many thought she should have sought traditional cancer treatments earlier on, citing alternative methods and the Gerson Therapy as “quack” medicine.

Whatever your position is on alternative vs. traditional treatments for cancer (and treatment for other forms of disease / illness), it seems to me that various evidence supporting that both working together may prolong a patient’s life. Obviously, even with the best in cancer treatment, patients die. And even with the very best in alternative practices, patients still die.

Having lost my father to the disease, cancer sucks.

How we did a parasite cleanse

Now that we have sufficiently warned you about this therapy – my wife wanted to try month-long herbal parasite pills (which we took morning and at night) along with several coffee enema’s to help excavate those critters.

After the first week on the herbal pills (which tended to give me a little heartburn a few moments after taking them), we prepared for our first enema.

We used organic coffee that was especially made for these “health cleanses”. We bought ours from the Gerson Institute’s store for $22. They even threw in the coffee for free (how about that!).

We used 4 quarts of purified water (reverse osmosis preferred) + 2-3 tablespoons of coffee grounds and boiled the water first then added the grounds and let it stew for several minutes (covered). After the coffee has cooled some (you want it lukewarm), you want to be sure that you separate the grounds when you pour the water into the enema jug.

I used a coffee filter and another hand-held filter to catch these. It’s a slow process but worth it to make sure none of it goes into your system. 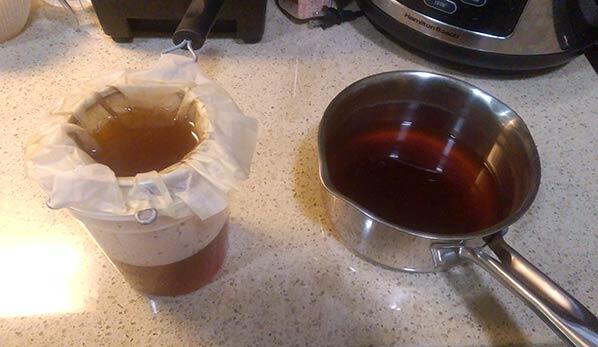 After things were ready and being the gentleman that I am, I opted to go first. You know, show my wife how it was done.  

I won’t go into the details of the first treatment – but after the initial shock of the whole procedure subsided, it really wasn’t all that bad. Of course, I had my moments of holding on for 10 minutes or so before I could relieve myself – but the results were fascinating.

My first couple of cleanses released a few parasites that shall remain nameless and it all left me feeling better afterwards.

Here’s how to setup the enema kit (from Gerson)

Here’s a few things I noted:

So, with the herbal pills we took, the whole procedure cost about $120. This seems like a lot – but considering how I felt afterwards, I feel like it was worth it. It’s hard to put a price tag on wellness.

As my mother has always said, “an ounce of prevention…”

My apologies if I grossed you out at any point – but I’d love to know your thoughts on this and if it is something you’d ever do? Or, perhaps you’ve done it. Was it worth it?