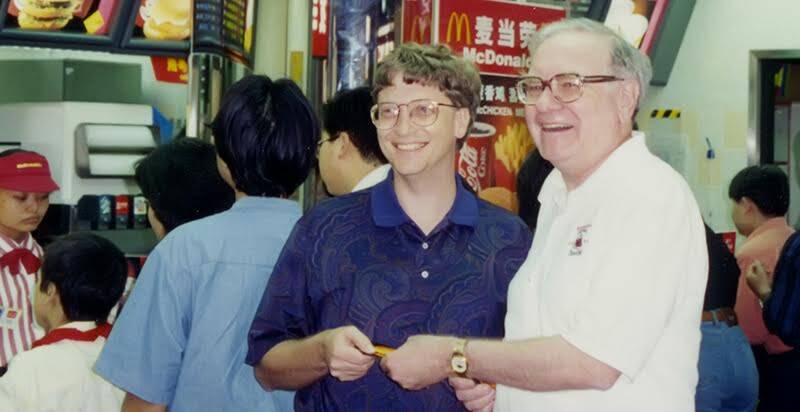 Why are Bill and Warren so happy?

Because Warren brought his BOGO coupon so they could get a free lunch at McD’s!

Billionaire’s Bill Gates and Warren Buffett were on a trip together when they decided to stop and have lunch together at McDonald’s. Before they got to the counter, Buffett reached into his pocket for a coupon.

The incident was so amusing to Gates, that he got a photo of the event. He also recently recalled the story in his foundation’s annual letter.

Remember the laugh we had when we traveled together to Hong Kong and decided to get lunch at McDonald’s? You offered to pay, dug into your pocket, and pulled out…coupons! Melinda just found this photo of me and “the big spender.” It reminded us how much you value a good deal.

“A billionaire using a coupon?!” you ask incredulously.

This is just one of those stories that leaves some of us dumbfounded. Why would a man who could buy a McDonald’s outright be so concerned about saving a few pennies on a hamburger?

We’ve written before about Buffet and his modest home / living.

Why do the rich tend to be cheap?

To me, this is fascinating question.

It was posed to the Q & A site, Quora. An entrepreneur and Microsoft employee gave a thoughtful response:

In my experience, a person’s attitude towards money is often influenced by how they made their money.  The easier they made it, the more freely they spend it.

Those who scraped together every cent they had and become wealthy by living cheaply tend to keep those habits even past the point when it no longer makes sense. The habits are ingrained, to the point their behavior seems neurotic.

Those who made their fortunes by growing it via their own skill and/or starting a business tend to have a healthy attitude towards towards money because they know how to create wealth and aren’t paranoid about losing it all.

The people who inherited money or stumbled into it tend to either blow it all frivolously, or become paranoid about losing it all.  Money does strange things to people.

Another, anonymous person offered this take:

I think most rich people are rational consumers rather than cheap. They will pay good money for things that bring high utility and not spend a dime on things that do not do anything. People may think that private jets and butlers are extravagances but they may actually help the rich person be more productive so it may not be a display of wealth.

So, the wealthy who practice thriftiness may actually value money more since they know the value of it. It is maximized to get the best output.

My tendency has typically leaned towards being a bit flippant / nonchalant with money. That’s why I got into a load of debt when I was first starting out. Suppose that could also be chalked up to being naive as well.

I have gotten more thrifty with money after I’ve had numerous bad experiences with it. I needed to learn the value of it. 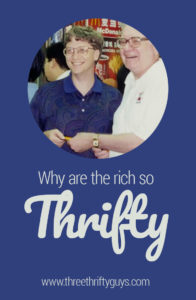 I don’t know about you – but when I hear about rich folks not tipping their wait staff or not giving more of their money to charity, I tend to get annoyed.

But, what if we stopped and thought through why it annoys us.

Maybe they think waitors / waitresses aren’t providing enough value for their service OR tipping shouldn’t exist? Maybe they give to charities in other ways – like with their time or are planning to give away most of their wealth when they pass (like Gates and Thrifty Buffett have planned to do).

I need to do a better job of giving the thrifty wealthy the benefit of the doubt.

Perhaps its another reason all together…

As Buffett has said:

“My life couldn’t be happier,” he explained at his annual shareholder’s meeting in 2014. “In fact, it’d be worse if I had six or eight houses. So, I have everything I need to have, and I don’t need any more.”

I guess we all could learn something from Mr. Buffett. In the end, contentedness will make us all happier.

What are your thoughts? Why do you think the rich tend to be so cheap?