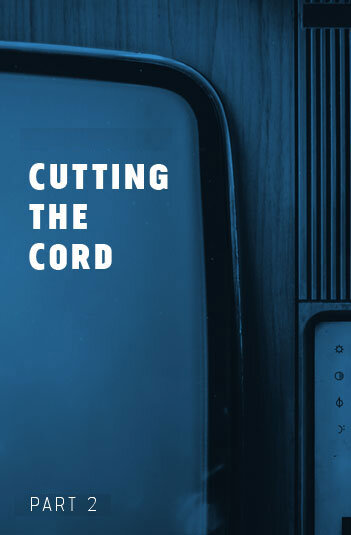 There were 16 people in front of me at the “King of Cable” (also known as Xfinity and before that, the beloved Comcast). I knew it would be a long wait, so I hunkered down along the wall with many of the others who were looking to cut their cable. Some carried their equipment in bags (like myself), boxes and others – just naked.

Although they were trying to avoid it with their swanky look and feel – the place felt like a DMV with the waiting screen mounted to the ceiling and disapproving faces abounding.

“We are finally going through with this,” I thought to myself, somewhat excited and relieved to start saving more money per month, sans cable.

I printed out Xfinity’s largest competitor’s price for internet from their website (much less than what we were paying with our “bundled” services) – and was hoping to strike a deal with the representative. Unfortunately, we had a 2-year contract with the King which wasn’t going to be met. All total our “early termination” fee would be about $60 and I’d already tried to get that fee reduced over the phone with another representative. They weren’t budging.

And, I wasn’t going to contest it now. I knew about this fee when I negotiated a reduction in our cable bill two years prior.

(It’s really no surprise the King of Cable routinely sits atop the heap of the “worst companies in America” for this practice alone.)

After about 30 minutes, my name was called and I approached the counter. The representative was respectful and courteous. Within 5 minutes, he canceled my cable and phone, and said they could offer a price that was about $10 above the competitor’s price (about $15 less than what I was paying with the “bundled” service). I thought that was fair.

What we’ll be saving without cable

All total, we’ll be saving about $1,200 per year without cable. Not bad! Well worth it for the savings and time we are getting back.

I should say we are planning to pick up Netflix or Hulu Plus, which will tack on another $8 or $12 per month. So that will cut into the “savings” some.

This cutting the cord has definitely got me inspired to consider more ways that we can live more simply. It’s also made me look at “bundling” in a new way. I’ve always considered bundling to be a cheaper alternative to a la carte.  But this is becoming less true with all the other alternatives out there for customers.

Take your landline for instance. While some are ditching them altogether for a cell phone, many (like my wife) need the landline for faxing and other purposes. With Ooma, we’ll only be paying about $5/month (which are taxes/fees) for our landline.

And if you really wanted to keep cable, you could opt for DirecTV, which you could get for $20/month.

Then with internet, many providers have great deals for new customers depending on the speeds you need.

Have you ditched cable and what has your experience been?