This article became a real life realization to me in 2008 when my Dad announced to our family that the bank was foreclosing on his 10,000 head pig operation and 500 acre farming operation. Like I’ve blogged before, this event had rippling affects on our family. In March, of that year, we all thought it would pass and Dad & Mom would emerge out the other side. However, the Lord wouldn’t have it that way.

Initially, as he went through this, I had a lot of anger feelings towards the bank and landlords. The feeling of how my dad had worked so hard – for 34 years – with dirt in his finger nails and a sore farmers back. How could this happen? It wasn’t fair. Those feelings quickly moved from anger to questioning: “what could have been different?”

That is when the Lord said to me, “The bank can’t foreclose on you if you don’t owe them any money.” It was that “ah-ha” moment that hit me like Captain Obvious flew in! 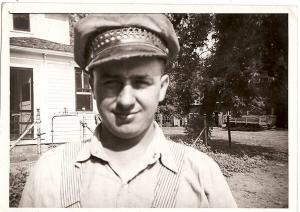 I’ve learned a lot from people who have lived a life of debt and who were also good financial stewards. In looking at both scenarios, I see a big differentiation in how debt is used. For the debt-free man, his attitude of debt is one that will go into debt at last resort, but wants to pay it off super quick. My grandpa described it as having a sickness. A disease that he wanted to get rid of his body. (Watch my grandpa and grandma talk about financial matters and living through the Great Depression in my one on one videos)

My Grandpa was one person I would describe as a good financial steward of his money and walked lightly around debt. People in my life that have gotten into debt seemed to easily fall for it. Like it wasn’t a second thought. Kind of like signing up for a credit card at the Target checkout. Often times no second thought is given to it, and the year upon year commitment they are signing up for. For example, taking on a $400,000 mortgage for a lot of people doesn’t take much thought. People are more so dazed and confused by how nice the house, yard, and appliances look, than how the debt is really just an ends to a means. They “want it”, so therefore debt is required.

As I think about each scenario, I think about the statement, “what type of legacy do I want to leave to my wife and kids“? What matters to me? What will people say about me at the end of my life?

Below is a good verse that I really put value in, and try and lead my life by:

“A good person leaves an inheritance for their children’s children, but a sinner’s wealth is stored up for the righteous.” Proverbs 13:22

The choice of debt

Most often we don’t understand how we got to the point of foreclosure. It shouldn’t come as any shock that foreclosure is the result of a series of 1) going into debt, 2) expenses outweighing income, and 3) not being able to keep up with the interest as a result of #2. In looking at this series, the first step is going into debt. That is why going into debt shouldn’t be such a flippant choice.

The point here is to REALLY consider things before going into debt. If you don’t participate in step #1, then the bank can’t ever foreclose on you! Really think about this for a moment. Seems so obvious, but easily forgotten when we sign up for a jumbo mortgage, buy a new car, or sign up for that credit card at the Target checkout lane.

I would like to hear from some of our readers on people that were an example of good stewards and bad stewards of managing their money. How did they treat debt? What was the differences in their attitude? What drove them?