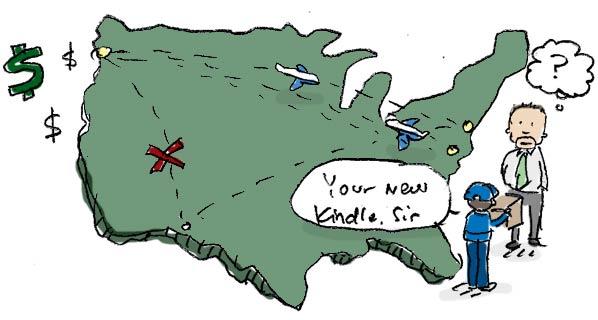 The following was written by Three Thrifty Guys reader, Andrew, who had an interesting adventure with the “beloved” online retailer.

Amazon.com may be the most consumer-friendly retailer on the planet, yet they can still get it wrong more often than they get it right, something I found out when they nearly stuck me with a lifetime supply of refurbished Kindle Fires.


Around Black Friday 2012, my mother told me she was getting my 10-year old son a Kindle Fire HD tablet for the holidays.   I’m a bit of a tech nerd and didn’t like the fact that the Kindle Fire uses a modified form of the Android Operating system, but in this instance I was willing to overlook that because the Kindle did get some excellent reviews and seemed like the perfect product to begin teaching a younger child how to use touch-screen based platforms that should dominate the next several decades of computing.   And of course, it wasn’t going to cost me a dime, so why should I care anyway?

My family used the Kindle pretty regularly until July of 2013, when the device suddenly stopped working.   I called up Amazon and they promptly sent me a new Kindle.  I sent back the dead one and went happily on my way … until around October, when the replacement Kindle started acting buggy, shutting down for no particular reason at odd times and going though cycles of acting this way for a few days, then seemingly returning to normal only to relapse several weeks later.

On Sunday, January 12, the unit died.

I called Amazon and advised them that I wasn’t interested in getting another replacement Kindle, given two dead units in two tries.  My mom had paid $179.99 for the unit and I asked if they could give me a credit for that amount.  I further pledged to use that credit and my own additional funds to purchase the new Kindle Fire HDX ($229.00 at that time), which I assumed would be a better product being all shiny and new, and I would return my dead unit as I had done back in July.   I was flatly refused and told that they would provide me with yet another Kindle Fire HD.

Let me tell you a little about me.   I don’t take “no” for an answer that much, and if I do, you’re either buying me off or hanging up on me.   I am a firm believer that if a customer service representative says “No,” what they’re actually telling you is, “I’m not authorized to make deals/decisions like that, so ask me to speak to my supervisor.”

Ten minutes later I was on the phone with a supervisor explaining my offer and how I didn’t want a replacement because we’d just do this dance again in another few months when the replacement for the replacement inevitably broke.   He advised that “Amazon’s systems” were not set up to do the type of exchange I was requesting and after debating the point with him for nearly 15 more minutes, he finally conceded that he could issue me a “promotional credit” to cover my mom’s original purchase price which I could then apply towards the purchase of a Kindle Fire HDX.  He walked me through the purchasing scripts and when I got to the checkout summary a promotional credit was listed on the order — except the amount was $60.00 and not $179.99.

At being questioned on the discrepancy, the supervisor explained that he would give me $60.00 and I’d pay the remaining balance (nearly $175.00) to which I responded, “Roll back your audio-recording.  You never specified a $60.00 credit, you told me you had agreed to my offer, and additionally, what I am supposed to do with my dead Kindle which is still under warranty?”   I then explained that what he had done was bait-and-switched me, which is a form of consumer fraud.  I was furious for my time having been wasted and proposed a new solution:   Amazon would let me keep the $60.00 to spend on anything I wanted and I’d accept their offer to replace the dead Kindle with a new Kindle as they had originally offered.   After being on the phone for nearly an hour on a Sunday, I thought it was a fair deal even if it didn’t get me the HDX that I wanted.

Once you accuse an employee of consumer fraud, the warning lights go on and most companies shift into what I like to call “appeasement mode.”

The supervisor agreed. I immediately spent my $60.00 credit on some K-cups for my wife… which, you know, you win some, you lose some, your spouse drinks the difference.

Two days later, a package from Amazon arrived.   It was my new Kindle Fire HD to replace my dead one.   Or so I thought.

Across the top of the box, a large sticker read, “Certified Refurbished.”

I’m not that big of a snob regarding refurbished merchandise.   I own a refurbished LCD TV that has worked perfectly for seven years.   There are some products where a refurbished model is better than a new one because they’ve figured out what’s wrong with it, fixed it, and then dropped the price dramatically since the item was “used.”   However, in this instance, I was still annoyed about the whole bait-and-switch conversation and felt like Amazon was trying to balance out their $60.00 kickback by providing me with an inferior product.

Fifteen minutes later, I hung up the phone with Amazon having a new Kindle Fire being sent to my home and another $30 in promotional credit at my disposal, which I used to buy some coconut water and beef jerky.  They’re terrific together, trust me.

The next afternoon, I received an email from Amazon indicating that my new Kindle was being shipped … to the address at the law firm where I had worked three years ago.  An address that is no longer valid because my old firm had moved from that address while I was still working there.

I called up Amazon again, spent 30 minutes on a conference call with UPS and my friendly Customer Service Representative so that UPS could intercept the package and send it to my home address.   Having accomplished that, I asked how much promotional credit they were going to give me this time.   Another $20.  YAHTZEE!!

Three days later, the Kindle arrived … at the address of my old law firm.

I called Amazon on Monday, January 20 and got them to agree that responsibility for this Kindle would not be my problem.  They sent me another Kindle.  Since it was now Monday, January 20, they apologized that the new device wouldn’t be able to arrive until Thursday.  I didn’t ask for any promotional credit since the lady I was speaking with was all together hostile and annoyed at having to deal with either me or the situation. Maybe I should have asked to speak to her supervisor?

Another refurbished Kindle arrived on Friday, January 24.  I was now ready to cancel my Amazon credit card and vow never to buy anything from them again.  On the inevitable phone call, I immediately demanded to speak to a supervisor because I wasn’t in the mood to go through the whole story only to have the CSR explain that they need to transfer me to a supervisor.   And yes, you can do this, although they may just send you into an endless loop of their hold music, which is a 90 second riff of a piano sonata that is played on an endless loop in Hell, which is where I was as the recording cycled again … and again … and again.

When a supervisor finally picked up after 10 minutes, I explained that I was no longer interested in dealing with their excuses on why they can’t send me a proper replacement.   At this point I was now in possession of my dead Kindle and two refurbished models still in their original shipping boxes, and someone in Somerville, NJ was enjoying a free (likely certified refurbished) Kindle.   I also explained that I’d really just like my money back because I’d rather get a proper tablet that runs the actual Android operating system and not a modified form of it that won’t require me to jump through hoops to get apps not specially made for Kindle to work on the device.

The supervisor said he understood my frustration and offered me the “exclusive opportunity” to upgrade my Kindle Fire HD to the new Kindle Fire HDX so long as I paid the difference between my model and the new model.   I was staggered.   After collecting my thoughts, I roared back, “That’s what I asked for two weeks ago!”  There was silence on the other end of the phone.  Finally, the supervisor said, in tremulous tones, “So I assume this would be ok for you?”

Ten minutes later I had purchased a new Kindle Fire HDX … for $32.  As a token of good will, they gave me another $15 of promotional credit.  The unit arrived on a Sunday, nearly two weeks to the precise minute that the original dropped dead.  In case you’re wondering, I bought a replacement filter for my ZeroWater pitcher with the $15.

Have a story to share of your experience with Amazon?