I’ve long been a student of the studies of the Great Depression.  That era in America intrigues me to no end.

Shanty towns were popping up everywhere as people built makeshift shelters to keep themselves and their families warm and dry.  Nearly everyone was affected by the Great Depression on some level.


The roaring twenties had been filled with a “que’ sera sera” attitude.  People were partying it up like they lived in the Garden of Eden.  There was very little thought of “tomorrow”.  Borrowing money was considered the key to prosperity and success (sound familiar?), and mortgages, considered a shame 30 years earlier, were quickly becoming commonplace and normal.

But as usually happens, one too many sticks got set on the large pile, and everything came tumbling down within a short period of time.   Then, as happens, people stopped spending, which in turn, hurt businesses.  Those businesses started laying off employees as they worked to stay open, and the rest is history, as they say. 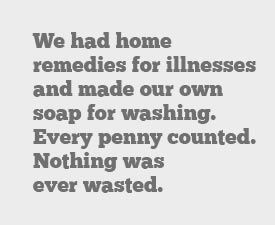 “For a refrigerator we used an empty gallon can with a rope tied to it, which we lowered down a dug well to sit on the top of the water. That would cool a pound of bologna… For a while before we had electricity, we heated the irons that we used to do the ironing on the cook stove. We bathed in a large wash tub that was also used to wash our laundry… Naturally, this was before air conditioning. So, during a very hot summer in, I believe, 1936 or ’37 we slept on the front lawn. It was just too uncomfortable to sleep upstairs… Also, when our car or truck tires got a hole in the tread, we inserted a ‘boot’ which consisted of a piece of an old tire to cover the hole. That was before tubeless tires.”
– Lester Baiman, age 82, Colton, CA (formerly of Hamilton)

“My father worked for the Norfolk and Western Railroad. I remember his work days being cut to only three days per week. He was a carpenter by trade, so we were more fortunate than most. He found extra work in his trade whenever and wherever possible. We never experienced the ‘soup and bread’ lines. He farmed and tended to his large garden, raised chickens and pigeons. We always had food. My mother made bread and pasta, and canned fruits and vegetables, much of it for the winter months. She made our clothes from whatever fabric was available. My father would re-sole our shoes when necessary. We had home remedies for illnesses and made our own soap for washing. Every penny counted. Nothing was ever wasted.”
– Madge Conti Browning, age 92, Columbus

“Very quickly after settling in, Dad planned how to pay off his debts with no thought of declaring bankruptcy. First he went to the feed mill and asked how he could work off that bill. The owner was unsure; no one had ever made such an offer before. But, after months of Dad’s hard work, we had a clean slate at the feed mill. Then, on to the lumber yard, where he received a definite ‘no.’ The owner didn’t need help because he wasn’t selling anything. Nonplussed, Dad asked, ‘Do you have any paint you can’t sell?’ ‘Sure,’ the owner replied. ‘Lots.’ Then, Dad asked, “If I scrape and paint all your buildings, would you consider my bill paid in full?” They shook hands, and Dad started scraping and painting. He said he hadn’t realized how many buildings were in a lumberyard, but finally another bill was paid and he had made another friend.”
– George K. Weimer, Jr., age 77, Sebring

“For Christmas, we always had a small tree with homemade paper streamers and popcorn; of course, no Christmas lights. To save on electric, we used candles. Our present was one doll, which we girls took turns playing with. Our biggest surprise on Christmas was that we would have chicken on the table and plenty of fruit.”
– Margaret Byrum, age 83, Chillicothe

“In 1938, my Dad developed pneumonia and was unable to work for six months. We were put on relief, which is somewhat like welfare is today. All we got for Christmas that year was a bushel full of staples: potatoes, flour, sugar, etc., and one jigsaw puzzle. Dad was able to get out of bed for Christmas and he, my brother, Joe, and I worked that puzzle together on our living room floor. It was one of my most memorable, meager, beautiful Christmases.”
– Mary Rose DeMaria, age 83, Oregon

“Holidays were special. We had foods that we didn’t get during the year, like oranges and nuts and freshly made peanut butter from West Side Market. That was our treat at Christmas. We didn’t have a tree or gifts.”
– Theresa Giallombardo, age 80, Maple Heights

“I recall when Christmas came along, my dad told us that he could not buy us much, but we were happy with what we got. Plus, when we wanted to light the tree, we had to go down to the milk house and start the generator. It was tough times, but we learned how to accept it.”
– Carl Krob, age 82, Bridgeport

“My sister and I learned to appreciate simple indulgences. On one Christmas, my only gift was a pair of rayon panty hose. I thought it was a wonderful gift because it was much nicer than the cotton I had always worn. And on another occasion, when I was a senior in high school, I had to make a choice between buying a winter coat and buying a high school class ring. I chose the coat.”
– Evelyn Brewer Neff Mitrione, age 86, Pickerington

“During the winter, we disconnected the refrigerator to save electricity and kept spoilable food in a window ‘icebox.’ You opened the window to put food in, and then closed the window to keep it cold. We didn’t have freezers then yet.”
– Thomas Rosmarin, age 85, Columbus 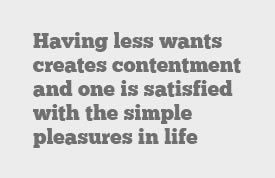 “One year, we three older kids decided to surprise the family. ln August, we secretly began to hoard every penny and nickel we earned. By December, we had $2.25 exactly. We shopped carefully, so everyone had a 25-cent gift on Christmas morning. I never saw Dad so surprised as he was with his two cigars! He said we shouldn’t have, with a smile! The favorite gift was a checkerboard and checkers. We had tournaments all winter.”
– Margaret B. Edwards, age 89, Gibsonburg

“We learned early on to amuse ourselves and not to have many wants. It’s the wants, not the needs, that do people in. Having less wants creates contentment and one is satisfied with the simple pleasures in life. Holidays, we baked cookies and wrapped them up in tea towels to give to relatives and neighbors.”
– Leona M. Osrin, Beachwood

“As I face unemployment and financial challenges, the lessons learned from my folks provides me the reassurance I need when I feel like things are way too tough. We must remain hopeful. We must remain determined. We must remain spiritual. And, in a pinch, a ketchup sandwich makes a great snack!”
– Karen Gaebelein, via e-mail

“I believe working hard, sticking together, and watching our pennies helped us through those difficult times. ‘Waste not, want not’ – important even today. Keep a positive attitude. Remember ‘Above the clouds the sun still shines.’”
– Helen Oliver, age 83, Poland

In the days of the Great Depression, words like “instant gratification” and “me” were replaced with “we’ll have to wait” and ”us”.  It was the patience, perseverance and selflessness that got our country through this terribly dark period, and, if we choose to go back and adopt these attitudes, they can get us through again.