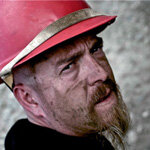 If there is one show I’m a sucker for on cable right now, it’s Gold Rush. There is something about watching a bunch of guys risking it all and going after the American Dream – especially at a time when many of us have been just trying to hold on to a job we could lose.

Greg Remsburg, a miner featured on the hit tv show graciously agreed to answer a few of our questions about what kept him going in the face of so many obstacles, how his family dealt with his absence and if there’s going to be a season 3.

We understand (from the Discovery Channel’s bio of you) that you were unemployed before going on the dig and are a good friend of Todd’s. How did he convince you to go on this adventure – or was it something you have always wanted to do too?

It didn’t take much convincing for me to be on board with this adventure.  My industry had taken a big hit with the decline of the economy and I was in need of something to provide for my family.  Watching our dollar being devalued and gold on the rise, it made sense to me.

So far this season, you’ve lost your claim, had to relocate, dealt with perma-frost and trommel issues. Didn’t think you’d ever get to the gold. What has kept you from not giving up?

We have faced a number of challenges during our mining adventure and each one seems to test us more than the one before.  My faith in God and belief that I am doing what He has called me to do is what really keeps me going.  There are days when I wonder if I should continue and then I will hear from someone how inspiring our mission has been to them.  The viewers and fans have been a big inspiration to me.

You all seem like good men. There is very little swearing and fighting. And, you guys are often found praying. Are you all Christians?

We are Christians, not perfect, just forgiven. We swear, get mad at each other, and make plenty of mistakes.  Watch how we deal with these different issues.  Our faith in God doesn’t make us better people than those that don’t have faith; it just ensures us a place in Heaven.

How does your family deal with your being away so long during the season?

These past couple of seasons has been both rewarding and trying.  The time away from my family is tough for me and for them.  It takes many pay phone or skype calls to make it through.

Are they generally supportive?

My family has been very supportive of me through it all.  I am very thankful for the support of my wife as she has had to be a single parent for a large part of the year.  My three kids have been great through this, as well.  They understand that I have to be away for periods at a time and that when I get home I’m a full time dad.

Given the popularity of the show, are you guys still able to “make ends meet” even if you don’t strike gold? Or, is it still do/die?

The popularity of the show has been incredible.  The need to find gold is not only for the short term but also for the long term.  At this point, I am able to make it until we head north again due to some remodel work that I have been blessed to have.

I think Gold Rush has inspired a lot of folks to go after their dreams. What type of responses are you guys seeing from the public as a result of the show?

The response to the show has been more than I could have imagined.  I have received letters from all over the world telling me how inspired some have been by watching us struggle together to fulfill a dream.  Some families have been reunited, some faith has been restored, and relationships rebuilt.  Some fathers have stepped up to lead their families and improve their marriages.  These are the things that help keep me focused on my purpose for gold mining and making the television show.

What advice might you give someone who is fearful to venture out and go after their version of the American Dream?

I have learned through my many mistakes that I need to rely on God to guide me in the pursuit of my dreams.  When I go on my own, I always struggle to succeed more than when I ask for His guidance.  My advice would be to give it to the Lord through prayer and let Him open the doors for you to walk through.

Lastly – will there be a season 3?

I have just received word that the Discovery channel has officially commissioned a season 3 for Gold Rush.  I hope that it was ok to disclose that information, oh well, too late now!  See you all next season and thanks for watching!