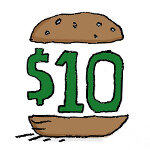 Going off a post I wrote last week on the possibility that eating out might actually be cheaper than eating in – I decided to push this alittle more and give myself a little challenge.

Eat out every day for an entire week. Spend only $10.

Why are you doing this?

Inspired by Enemy of Debt’s “No Restaurants in November” challenge and a recent article about why dining out is cheaper than eating in, I decided to do a little investigation of my own.

Now I’m certainly not dissing the “don’t eat out – make your own lunch” crowd here. I believe there is real savings to be had by preparing your own lunch every day for work instead of going out.

However, there are always two side to every story. And, with costs of grocery food going up – perhaps it may be worth looking at the dining out vs eating in question in another light.

There is nothing scientific about this bit of research. The rules were simple. Grab take-out food – anywhere around my place of work – and spend only $10 for the week. 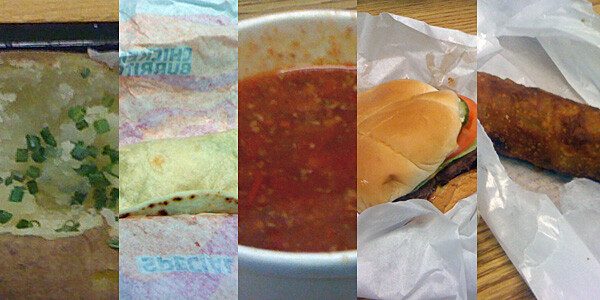 Monday
I decided to start first at one of the more premiere take-out establishments in my area: Wendy’s. Who doesn’t love Wendy’s?! There are an assortment of items from cheap to pricier – and most of the ingredients are pretty good quality. For a Monday, I thought I’d take er easy and not get too carried away:

Taco Tuesday
To celebrate Taco Tuesday – I hit up an old college friend: Taco Bell. I was craving a 7-layer Burrito, but the price has gone up since graduating. I opted for a MexiMelt instead.

Wednesday
Ah.. Hump Day.. since Wendy’s was so good to me the first go-around and they offer such great prices on some pretty filling items, I revisited. This Wendy’s in particular has great service and is fast. I love frequenting them. I got a small chili with two cracker packages. I have to say, their chili is pretty darn good.

Thursday
Okay, now you’re going to think that this is some ad for Wendy’s. Yes.. I hit it up again – but only because I had a coupon for a free W burger from a friend. And, the thing expired today! I know, I know. So, today wasn’t quite as healthy as the other days. Because my burger was free, I was able to apply my budget to some fries. I went all out and got the medium fries.

Friday
Today I had a little extra in the tank, so I went out and got one of my favs: an eggroll from Big Bowl. It was a little toasty on the outside – but it did the trick.

All total, I spent $9.40 – so had a few cents left over for good measure. I tried not to use any coupons as to skew the results any (well, save for Thursday). You could get more food than I got if you chose to use em.

I think one of the biggest things I’ll take away from this week is that I don’t need to eat as much as I’ve been eating. I’ve gained a few pounds since marrying (nothing against my wife), so trying to eat on $10 or less each week is probably a good goal.

So, you can eat out on less than $10, but you won’t exactly get a lot. I’m not sure that’s bad? Everything is so super-sized today – and the quantity has gotten pretty crazy (I’m sure you’ve seen a Chipotle burrito!).

Eating out is a pricey endevour though. Most items on the menu are over $5, so you really have to look at the take-out places’ a la carte menu. Wendy’s in particular has a good assortment of items that are fairly filling and won’t cost an arm/leg.

How do you think I did?