This guest post was written by Mike, the owner/operator of CreditCardForum. Not only is it a message board for analyzing credit card offers, but also tips and tricks to beat the banks at their own game. 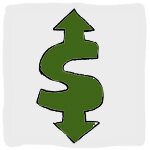 When it comes to negotiating a deal, what do you think of? Perhaps buying a car or even a house? Sure, those may be two of the most common things, but there’s a lot more in this world that’s negotiable. Here are 5 surprising things you may not have thought about…

#1. Grades
Talk about ironic timing. At the exact moment I finished writing the above paragraph, a good friend of mine called, bubbling with joy. Why? Because he had successfully negotiated the grade on his mid-term!

“I was given a ‘C’ but my employer will only pay the tuition if I get a ‘B’ or better. So I emailed the professor and explained… he switched it.”

He’s in grad school at one of the University of California campuses, but regardless of the educational level, negotiating grades is something that can be accomplished more often than you think. It won’t work every time, but some teachers and professors would rather give a better grade than listen to you nag them. Not in school you say? Well, remember this tidbit for the future when your son or daughter is down in the dumps because of a bad grade they got.

#2. Retail Chain Stores
Contrary to popular belief, the prices you see at Best Buy and similar retail chains are not set in stone. How do I know? Because over the years, virtually every big ticket item I’ve bought was negotiated.

For example, my laptop was advertised at $670, but I convinced them the only way I would buy it is if they would knock $40 off. Why? Because there was a similar one online for that price. Technically speaking, Best Buy’s price-match policy doesn’t apply to online purchases, but get talking with them and explain they can (a) lose the sale entirely, or (b) knock a tiny amount off and make a sale. They will usually spring for the latter from my experience.

Over the past few years I have used this technique to negotiate the price on 1 TV, 2 laptops, a Blu-Ray player, and even a couple purchases for friends. I have done this at multiple Best Buy locations spanning two different states, so don’t think my luck is just store specific. The key is to just shoot for a small amount and be prepared to receive your discount in the form of a store credit (because apparently changing the actual price in the system isn’t always possible).

#3. Doctors & Dentists
You’ve probably heard that medical bills can be negotiable, but most articles I see about this topic tackle it the wrong way. They tell you how to negotiate after the bill. The secret is to negotiate before the services are even rendered.

If you’re at the dentist for a cleaning and say “Hey, is there any way we can do this cheaper?” they will laugh in your face. Since you’re already there, you’re a captive customer. They know this and therefore have little incentive to adjust the price.

However, if you call them before ever going and say “I am due for a cleaning but money is tight. I was going to skip it, but if there’s any way we could knock a few bucks off the normal price, I will do it.” You would be surprised how often they oblige. I know through first-hand experience, because I was dirt poor without health insurance for years.

#4. Credit Card Rewards
By now, everyone knows you can negotiate credit limits, late fees, and interest rates. But did you know that credit card rewards are also negotiable? Generally speaking, there are two circumstances when this is possible:

The first scenario is when you attempt to cancel a credit card. I cannot even begin to tell you the number of people on my forum who said they were offered incentives when they tried to cancel their card. Actual examples include an extra $75 cash back, 10,000 frequent flyer miles, and 10% cash back on gas for one year.

The second scenario is when you have stopped using your card. Once in a while they will call to try and encourage you to use it. When that happens, tell them you would use it as your #1 card if it only gave better rewards. Sometimes they will offer to boost your rewards for 6 or 12 months. For example, instead of earning your normal 1 point per dollar, they may offer 1.5 points.

The most surprising part? All of the above examples involved cards which had no annual fee and no balance was being carried. It’s crazy to think that credit card companies would shell out such generous incentives to keep customers on-board, but at the end of the day, it’s probably cheaper for them to do that then mail out all those darn credit card offers in the mail, right?

#5. Funerals
I know this is a “Debbie Downer” topic to bring up, but when there are thousands of dollars in potential savings, it’s something we should all talk about sooner or later.

Most funerals are unexpected and for this reason, when a loved one just passed away the last thing we are thinking about is price negotiation. Funeral directors know this, which is why they conveniently forget to mention that their General Price List (GPL) of specific packages can almost always be custom-tailored. If a package includes specific services you don’t care for, they can be removed and the price adjusted accordingly. Last but not least, there’s another technique at your disposal: simply offer less, just like you would at a car dealership.